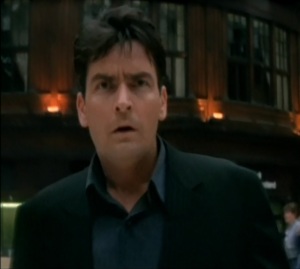 Charlie Sheen spent time in Glasgow during 1997 while filming the previously featured Postmortem. The film had him shooting scenes in a wide variety of city locations, including George Square, Central Station and the Necropolis. However his “wild man” image that has reached its peak via social media in recent years was on display in 1997 too and there is a host of controversial tales involving the actor’s spell in Glasgow documented, including one that suggests he visited an Easterhouse housing estate to procure some drugs. A Google search of “Charlie Sheen Glasgow” throws up archive newspaper headlines like “I WAS CHARLIE SHEEN’S HOOKER” and “CHARLIE SHEEN IN COCAINE BENDER”, painting a picture of one of Glasgow’s messier encounters with Hollywood. 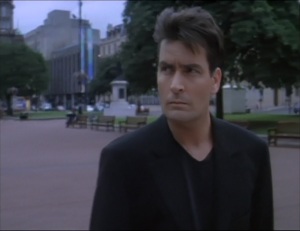 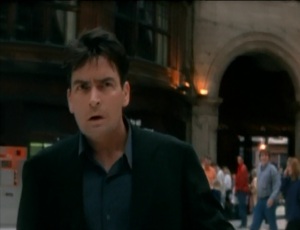 This 1998 movie evokes bittersweet feelings in Glasgow on Film. Back in summer 1997 when it was being filmed, it was the first Glasgow-shot movie that GoF really sat up and took interest in – a curiosity that has grown into the passion for the subject that exists today. Any sentimentality though is tempered by the fact that Postmortem is, well, pretty terrible.

In summer 1997 the internet was limited in terms of both availability and content so there did not appear to be the rumours or rumblings of anything coming Glasgow’s way, and by the time GoF had been alerted to the production nothing had been noticed in the newspapers either. A relative had been in the city centre and noticed a lot of crowds and commotion on Gordon Street – when she asked one of the event security people what was going on he replied that Charlie Sheen was making a film. To the naive 15 year old that was GoF this was a big thing – in the couple of years preceding there had been a lot of hype with the shooting of Shallow Grave and Trainspotting in Glasgow, and reports of Mel Gibson immersing himself in the city to prepare for Braveheart, but this appeared to represent the first time that a Hollywood name had come to Glasgow to make a film set in Glasgow (GoF had not been aware of Death Watch, with Harvey Keitel, at that point). The naivety also meant that GoF gave no consideration to the film being a low budget, straight to video release – it always seemed as if movies just came out with the same fanfare as the last one, so surely this would get its glittering premiere and be screened in multiplexes across the globe, showcasing Glasgow as it did so? No, it was straight to video and it could be suggested that Sheen’s billing as “Charles Sheen” was an attempt by his management to deflect attention from his part in the production.

So what is Postmortem about? Sheen plays James McGregor, an American cop turned author who has relocated to Scotland for peace after wrapping up a child serial killer case in the USA. When a young woman’s naked corpse turns up in his garden he is immediately arrested as the suspect, however once his name is cleared the Glasgow police turn to McGregor for help as it now appears that they have a serial killer on their hands as more women are found in a similar condition around the city. The body count grows, but as McGregor and the native detectives figure out the pattern – the killer, the son of a funeral director, has been meeting the women at funerals of their relatives and teases McGregor by faxing the obituaries of the deceased relatives to him ahead of the bodies turning up – the team manage to save a couple of lives before a confrontation at the Necropolis where the murderer kills himself.

You can tell that there is something wrong with this film before you even take the DVD out of the case – the description on the back states that McGregor “flees to a small, peaceful Scottish town…” – a ridiculous description of Glasgow that neither its champions or its critics would use, and not even justified by its portrayal within the film with one character using the phrase “…our great city of Glasgow”. Criticising the descriptor may be nit picking, but there are so many negatives about the film itself. In terms of acting, English actor Michael Halsey and Sarajevo-born Ivana Milicevic play the lead detective roles – Halsey’s accent is pretty poor but salvaged somewhat by a semi-convincing gruffness, however Milicevic’s effort is dire – one could say it sounds Irish but that would almost be a compliment. Halsey fluffs his lines at one point and the director sees fit to leave this in. Then there is the awkward moment of a victim’s father, a well spoken Scottish man telling McGregor “…you would do anything, any goddamned thing…”. There are plot holes galore: McGregor seems to live practically in the Highlands yet it’s a city centre squad that are dispatched to his house to deal with the first murder; an officer “extra” seen aiding McGregor in one scene is restraining him from apprehending a suspect less than a minute later; and a red herring scene in which one of the killer’s targets is met by an actual friend of hers is astoundingly bad.

Last points in the postmortmem of Postmortem are about the general production values. There’s a bit where Halsey’s Detective Inspector Balantine is stabbed and killed – as he drops, rather than the usual theatrical blood, what can only be described as a kind of broth spills from his mouth. And the whole movie looks like it has been filmed on someone’s mobile phone.

Scottish actors Stephen McCole and Gary Lewis make up the rest of the top billed cast.